What is the size of a bacteria?

How do scientists and engineers handle such large values?

In this case the mass of the Sun is represented using positive exponent. It is expressed as 1.989 x 1030. 10 is the Base here and 30 is the Exponent. Thus, when we express positive exponents, the decimal is moved 30 places to the left

We would represent the size of the bacteria using negative exponent. It is represented as 5 x 10-7. So here the decimal point is moved 7 places to the right. When the value of the exponent decreases by 1, the value becomes one- tenth of the previous value.

We can also add and subtract large numbers and small numbers. When we add two numbers, the power of exponents in both the numbers should be made the same. Its is always better to convert the lower power to the highest.

On dividing two numbers involving exponents, we divide the numbers and the exponents are to be subtracted.

In these scientific notation worksheets, you will learn to convert standard numbers into scientific form and scientific form to the usual form. A lot of word problems here gives you the practice to handle very large numbers and very small number most effectively. Print them all for practice. 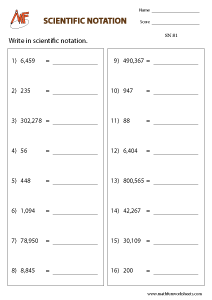 1 thought on “Have you ever wondered how big the Earth is? How small a mustard seed is?”